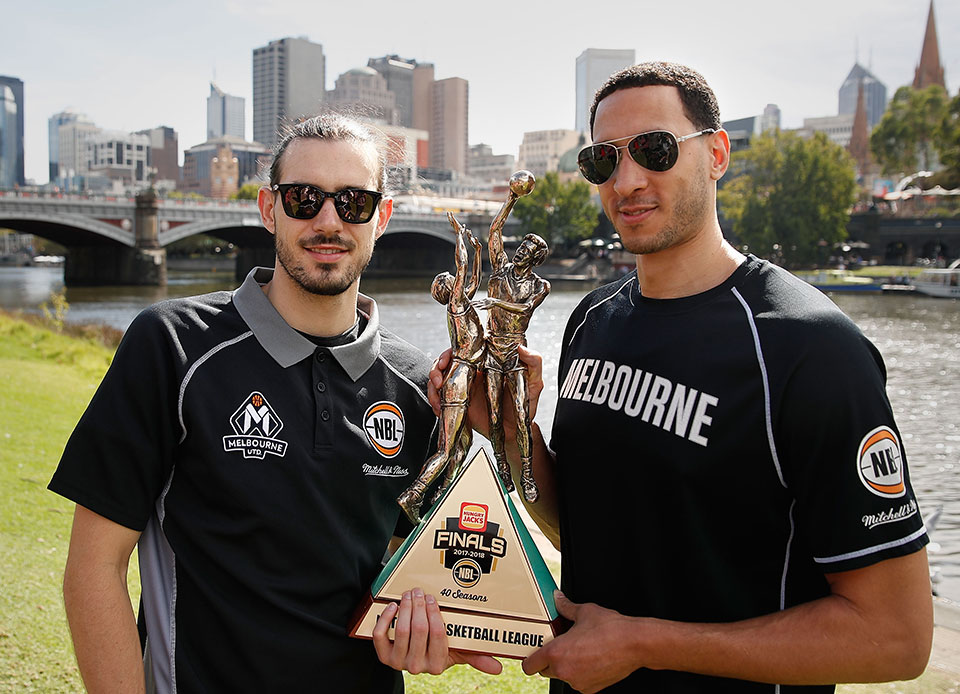 Melbourne United centre Josh Boone “can’t wait” to match up on Andrew Bogut during NBL19 and defend his title as the league’s most dominant centre.

Having recently re-signed with Melbourne for the 2018-19 season, Boone arrived in Australia on Monday as United continue preparations for their championship defense.

Speaking with NBL Media before departing the U.S., Boone said he was excited about the prospect of playing on Bogut and has already started studying the nuances of the Sydney star’s game.

“I can’t wait for it, honestly,” Boone said.

“To have two former NBA guys go at it at least four times in the year is going to be great for the league.”

Boone led the NBL in rebounding and was top five in field goal percentage last season as he held down the middle during United’s championship run.

He finished top ten in voting for league MVP and was rightfully named a member of the All-NBL First Team.

He also absolutely dominated the Kings, averaging 19 points and 12.5 rebounds per game on 66 percent shooting across Melbourne’s 4-0 sweep of the purple and gold.

But Bogut’s arrival has dramatically altered the landscape in Sydney and Boone will need to step up even further if United are to topple the Kings this season.

One thing that will help is that Boone actually knows Bogut’s game reasonably well having competed against him in college as well as a handful of times in the NBA.

However those clashes were long ago and Bogut’s game has changed significantly over the years. So when the Kings held a pre-season hit-out with Saint Mary’s College recently, Boone was watching the live stream from his home in New Jersey, taking notes on the Aussie’s tendencies.

“I’ve always been about match ups and before every season I’m always looking up video and studying who I’m going to be playing against,” Boone explained.

“It’s easier with Andrew because I have played against him a bunch of times and have seen him play for years. That being the case, there is still a lot of research going in. That’s why I’m already watching their games.”

Boone re-signed with Melbourne earlier this month after he and the club engaged in a fascinating free-agency dance throughout the off-season.

Melbourne head coach Dean Vickerman was pretty open about potentially finding someone better at the five position, citing Boone’s age (he turns 34 in November) as a possible concern in terms of bringing him back.

Boone says he wasn’t perturbed by any those comments and while there were no guarantees that a deal would eventually be struck, he and United were in constant communication throughout the winter.

“They wanted me back and I wanted to be there but it is a business at the end of the day and that is how we both had to look at it,” he said.

“It took us a while to get to the point where we were both on common ground. In fact, it really took until the 11th hour, until it was almost not happening, for it to happen.”

According to Boone, Melbourne essentially had an offer on the table the entire time and when the big fella’s pick-and-roll partner signed on, he quickly put pen to paper himself.

“Realistically the catalyst in me actually getting a deal done with Melbourne this year was them getting Casper Ware back,” Boone said.

“Once I knew that Casper was going back then things changed a bit.”

Boone states emphatically that he and Ware formed the best big-small combination in the NBL last season. The two were almost unstoppable in the pick-and-roll, especially against teams like Sydney who struggled with their backside rotations.

But just as Bogut is the new sheriff at the five spot, he and Jerome Randle have already been labelled “the best one-two punch in the NBL” by news media in the Harbour City.

Boone, however, is not quite ready to hand over that title just yet.

“Both those guys bring a lot to the NBL and if they continue to develop the chemistry, like I’m sure they will, I think they’re going to be a great duo as well.

“Obviously, a lot of people are looking forward to seeing how, not only the duos, but really the entire teams respond to each other when Sydney plays Melbourne.

The Kings are clearly the biggest threat to Melbourne’s chances of repeating but, with all teams re-loading over the off-season, there are bound to be others who challenge for the throne.

As far as Boone’s concerned, though, Melbourne need to make sure their own house is in order before worrying about anybody else.

“We set a blueprint last year for the type of team that we need to be; we were a defence-first team,” he said.

“Talent is not going to get it done… We need to be a defensive-minded team first and foremost that plays physical.”

Melbourne and Sydney are set to face off this week in a two-game pre-season series.

With thanks to the Victoria State Government, the first game will be on Thursday August 30 at the newly renovated Bendigo Stadium. The two teams will then face off again on Saturday September 1 at Victoria’s State Basketball Centre.

Written for nbl.com.au by Liam Santamaria